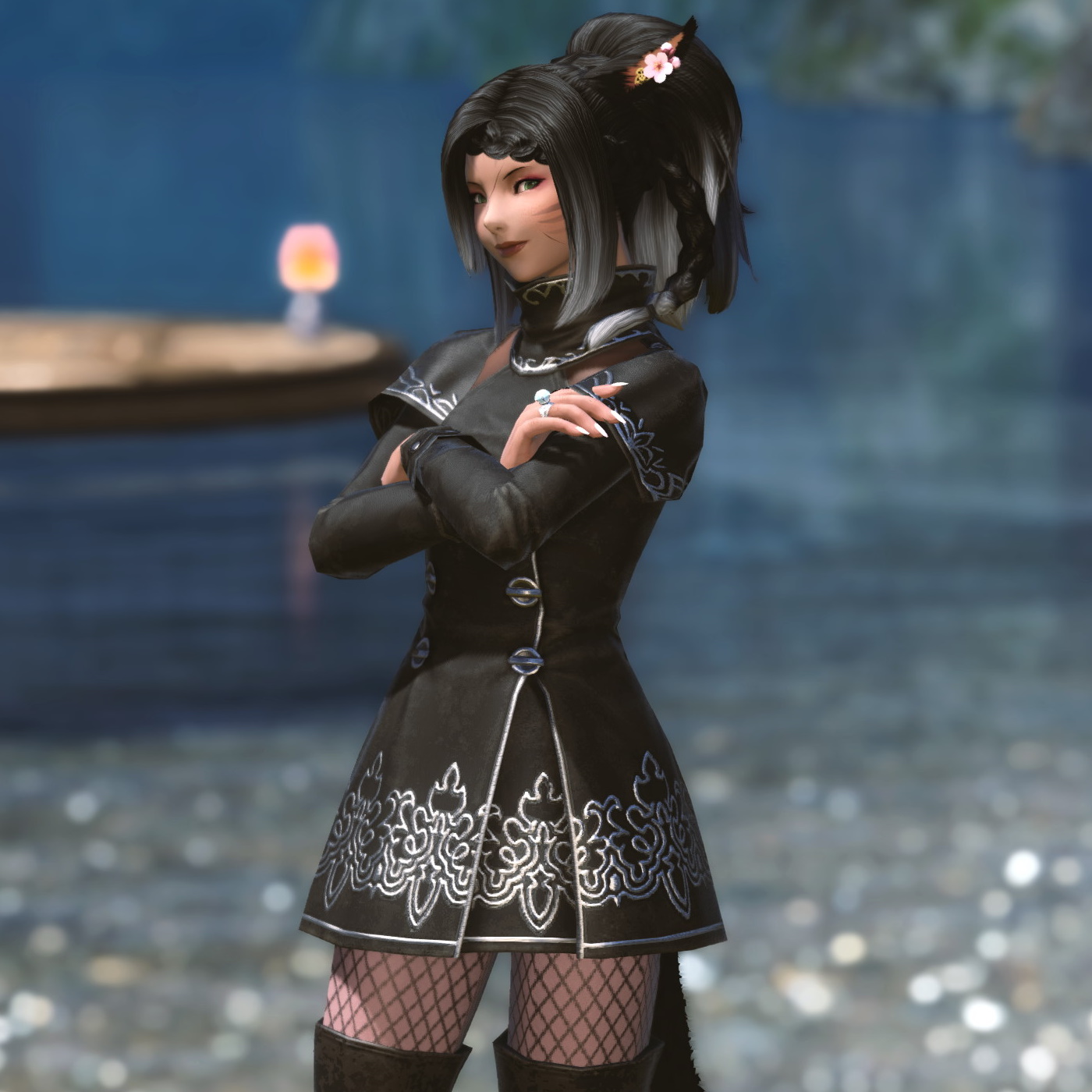 The twelfth child of a renown huntress, Rinh was born to a life they could never quite understand. They grew up deep in the northern shroud, living in a small commune with their sisters and two other families. Their brothers, being much older, had left by the time they were born. Occasionally their brothers and father would visit but never for long, at least long enough to have an impact on their growth. Try as their mother might, there was no way to make a proper man out of this runt.

Eschewing the family's long heritage of archers, the miqo'te elected to train in the spear. While it's a weapon that doesn't favour their small size, they eventually became competent with it, learning how to use their agility and the reach of their weapon to counteract their strength and size disadvantage. The cocky but determined keeper over time learned how to make a show of combat, how to taunt an opponent into letting their guard down, how to get them to charge and impale themselves on their lance.

Soon enough the young teen had a reputation for picking fights, especially with boys much bigger than them. Though they didn't always win, each fight was more experience, more practice at how to get under an opponent's skin. By the time of their sixteeth nameday, their commune was more than thrilled to see them go, their reputation for fighting causing all sorts of issues with the neighbours, with Gridanians, and with adventurers. It wasn't so much a kiss on they cheek but more a kick on the backside that their mother gave them as they left. "Go on and don't come back 'til you've settled."

Homeless but finally free, they practically ran to Gridania. They were taken by the city almost immediately, the bustle, the people, the trade, the danger, all of it new and all of it exciting. For a few weeks they took honest work for honest pay, earning just enough to live. As they became familiar with Gridania they began to court new opportunities, working for some of the shadier merchants. "Oh, you need me to shake someone down? You need someone to fetch hides from poaches? No problem, just leave it to me." Just a few months after arriving, Daca already had a reputation as a morally ambiguous sellsword.

One night they were doing a weapons deal, a trade of bows for gil with some poachers, when Adder agents showed up. They barely got away but they knew they couldn't go back. Taking what gil they had on them, they fled south towards the desert. The keeper had heard tales of a city that not only allowed folk of their ilk but rewarded them, a city of rich thieves and scoundrels: Ul'dah. Though their body was nowhere near acclimated, they made their way through Thanalan, dehydrated, sore, and burned by the time they arrived. Almost on death's door, the miqo'te was 'home' and ready to start a new life.

Years have passed since then and with the passage of time Rinh has only become more cocky and better connected. They spends their days resting and their nights in the bars.